The role and activity of chaplains in Balloon Command is rarely recorded in the history of the war. Here are a few brief notes on one particular chaplain who had an amazing career.

Born in 1881, George Kendall first became a steel worker at Thorncliffe in Yorkshire and then trained as a Primitive Methodist minister. He befriended Queen Mary, in Windsor who invited him to tea after he was seen outside the castle preaching on the steps of Queen Victoria’s statue .

When the 1914-1918 conflict broke out he volunteered to go to France as chaplain. He served with the Borderers in France and Salonika, also alongside them at the Easter Rising and later with the mighty Welsh Division in France/Flanders. He eventually became a senior chaplain with the rank of Major.

He was with the Army on the Rhine at Cologne from 1919 and in 1920 he was appointed as Senior Chaplain in charge of the completion of the War Cemeteries in Belgium and France. He supervised the exhumation of bodies buried where they fell and moved them to the new cemeteries the Army had built before they were closed with a Service he took and handed them fully complete except for the Headstones and gardens to the Imperial War Graves Commission.

He made every effort to identify the bodies when he could. When it was decided to create a tomb to the unknown warrior, he was chosen to find six bodies that were unidentified.  These were taken to a military base and one was randomly chosen to be the unknown warrior and repatriated to Britain for burial in Westminster Abbey under 6 sandbags of foreign battlefield soil.

At the end of the War, he was promoted as the youngest ever Senior chaplain to the Kings Royal Naval Division, with the rank of Major.

In the Birthday Honours list of 1919, he was awarded the Order of The British Empire (Military).

He was appointed Superintendent of the Primitive Methodist South Wales Mission in 1921. He lived in the Ely Valley and was Padre to 5th Battalion 53rd Welsh Division from1922-26. His War Memorial Church, St Georges church was built by him in 1925. He had buried many officers and men during the Great War and it had affected him considerably and the church was his own personal memorial to these men.

He also opened the Cardiff Cenotaph and Tonyrevail War Memorials with Field Marshal Lord Allenby and attended the laying down of the Welsh Colours in 1924 with the future King Edward.

Some excerpts summarised below from ‘’Daring All Things’ the autobiography of George Kendall OBE (1881-1961)’ reveal something of his time in Balloon Command.

When the conflict of 1939-45 broke out he volunteered for service but was too old for active service abroad and was appointed as R.A.F. Chaplain to No.910 Balloon Barrage Squadron.

This covered an area of balloon sites from London Bridge to Dagenham, including the Dockland areas. There were 81 sites manned flying barrage balloons including various barges on the Thames with waterborne balloons. It was an area that was subject to considerable enemy action. He was given a headquarters in East Ham and was a familiar sight being driven around the various balloon sites on an R.A.F. motor cycle and sidecar.

He was thus able to visit even the most isolated sites at all hours of the day and night, regularly eating with the crews who welcomed him. The Commanding Officer of No.910 Squadron was of the opinion that the Rev. George Kendall's visits to the balloon crews certainly helped in keeping morale up. He even made a point of visiting the isolated waterborne balloon crews on their barges. He regularly travelled from Woolwich to Becton Gas works and along the river to Dagenham.

He missed death by chance when a bomb fell and a man was killed by the blast and although Rev.Kendall was 30 yards closer to the point of detonation he survived the blast. He was present in the area on the weekend of 7th and 8th September 1940 and witnessed the dogfights as the R.A.F. fighter planes attacked the German planes. He left No.910 Balloon Squadron in 1944 when they disbanded. 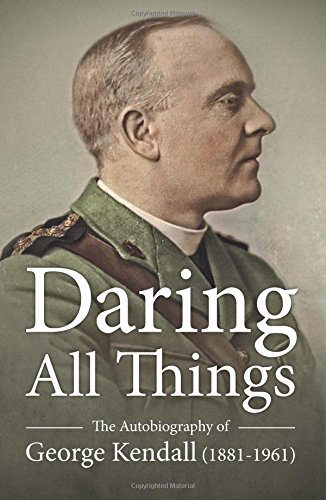 ’Daring All Things’ is a unique and extraordinary autobiography, published for the first time 55 years after its completion shortly before Rev George Kendall died suddenly in 1961, aged 79. The book is the life story of a man born into a working class rural Yorkshire childhood in the late Victorian era, who through self-education, piety, ambition and sheer hard graft projected himself onto the, then, British Empires biggest stages.

Kendall chose the life of a Primitive Methodist Minister and, initiated through World War One duty, also pursued a dual career as a military Chaplain which lasted 30 years in war and peace. Using his Christian faith, humour and straight talking, Kendall became a confidante to British Royalty, Prime Ministers and religious leaders throughout the first half of the twentieth Century. Using his initiative, bravery and patriotism he became both participant and eye witness at many of the epoch making moments during the most intense period of the United Kingdom and Irelands Histories. Two World Wars, the rise of Women's rights, the rise of working people's rights, the rise of Sinn Fein, the creation of the NHS and the welfare State and the development of the modern Police and Prison systems were all within his compass. Rev Kendall always ensured that a keen sense of morality, both public and private, was always to the fore. However he was no staid clergyman- he delighted in life and it's colourful characters. As one of the last of the great polymaths, Kendall was able to advise and educate both in private and public arenas. Speakers Corner, which he described as 'the greatest forum in the world', became his open air pulpit and he was it's most well loved speaker by the 1930's and through World War Two, when he again served as a military Chaplain in London. By the final years of his life, Kendall was the country's most war experienced Chaplain, having spent eight years on the front lines in four different countries and serving a further three years post World War One with the first British Army on the Rhine. In 1920 he was given the responsibility of being in charge of the exhumation of the battlefields of Belgium and France and building the war cemeteries we know today. His work there culminated in the highly secretive process to select the body that became 'The Unknown Warrior' and he ensured his safe passage to England, to be buried at Westminster Abbey.

George Kendall's life was shrouded in mystery, much of it unrecorded formally. 'Daring All Things' finally reveals the enormity of his experience and provides new historical information that will lead to academic revision of many of the events he lived through. Ultimately the purpose of the book is to explain in the clearest of terms Rev Kendall's belief in divine providence in both his and anyone's life who believes in it. This has been understood as 'Gods Hand' at work on earth. If this most remarkable of accounts doesn't make you a believer-nothing will. In order to promote the primacy of Kendall's testimony the modern day equivalents of the individual national leaders he met and worked with provide forewords to each chapter. Each reflect on the man they encounter and the cumulative effect is both a memorial and reassurance that hats might change, climates change, priorities change but the underlying nature of the British establishment remains- if a little frayed in modern times. Hope is, in deed, alive.